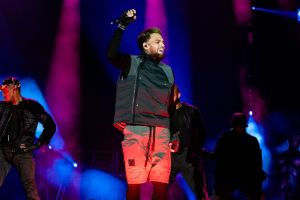 A new Breezy era is on the rise with Chris Brown‘s latest single, “Iffy.”

The pop star kicks off the start of his 10th album with what sounds like the next birthday party anthem quoting 50 Cent’s “In Da Club” singing “It’s your birthday, put your hands in the air if it’s your birthday / And you know we don’t give a f**k it’s not your birthday,“ while also paying homage to the late Kobe Bryant. “24 on the jersey, just for Mamba and shit.”

Being known for dropping lengthy album tracklists, sources say Breezy promised to keep it short this go round.

No word on when the alum will drop but watch Chris Brown’s new single “Iffy” below.

HEAD TO THE RICKEYSMILEYMORNINGSHOW.COM HOMEPAGE

Sad News: Rap Pioneer Kangol Kid of U.T.F.O. Has Died
He Tried It: Tommy Hilfiger, You Are Not The First Streetwear Designer
Lizzo Gives Us Hair Envy On The Season Premiere Of ‘RuPaul’s Drag Race’
Share in
Tagged in